Getting a government job in India is like finding gold in an ocean. Although, getting a govt is tougher than finding gold in the ocean. There are a lot of merits of govt job and one of them is Job security. A greater section of India’s population belongs to the middle class. Not everyone can afford to invest in a business or a start-up. A major section of India’s youth population prepares for government job for a better lifestyle and come out from their conventional living of standard. Many youngsters of India dream of becoming a government officer and appear for several exams.

Every year millions of students appear for different kinds of competitive exams and try their hard to crack those exams. Some of the prominent competitive exams are conducted by SSC (staff selection commission). SSC conducts a variety of exams in India based on educational qualification. Mainly there are two major exams conducted by SSC in which millions of students compete against each other. These exams are SSC CHSL (Combined higher secondary level) and SSC CGL (combined graduate level). Those who have passed 12th standards are eligible for SSC CHSL and those who are graduate, they can apply for SSC CGL. 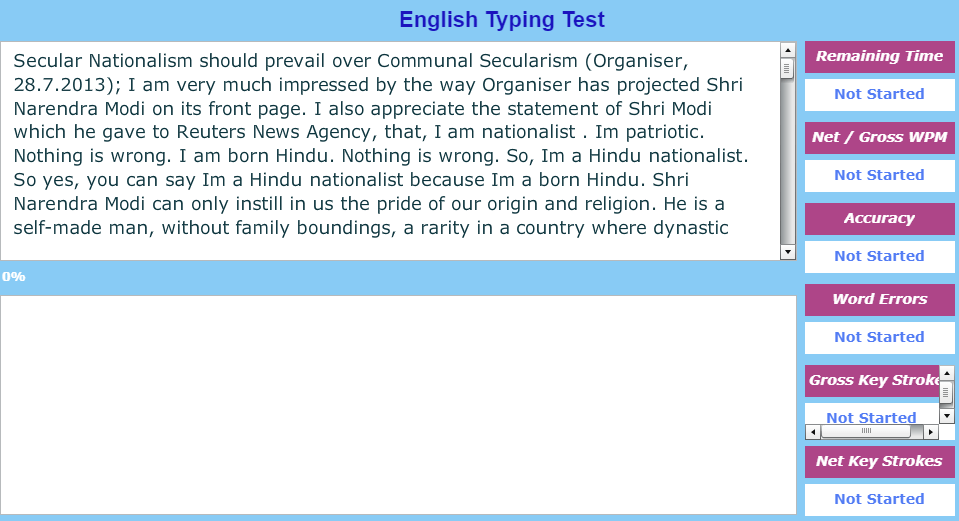 SSC conducts one of the biggest exams in India. There are some vital posts in SSC which require typing test. A student must have to be a skillful typist to get a particular post in SSC recruitment. To be a proficient typist, a candidate requires a lot of practice and stern dedication to be the best. There is a lot of ministerial and non-ministerial post in the SSC which wants skillful typists. A skillful typist doesn’t mean that he/she has to type fast, rather it means the person must type fast with very minimal errors. The more errors come in the typing test; the more there will the chances to fail the exam. So being a good typist means typing with no error in less time. Practice is the only key by which a candidate can gain optimum speed in typing.

SSC conducts typing tests basically after the phase-1 examination. In SSC CHSL, those candidates who qualify for the phase-1 exam with good marks, become eligible to appear for the typing test. Phase-2 of the SSC CHSL exam is Typing test. SSC CHSL Posts in which typing required are Lower Division Clerk (LDC), Junior Secretariat Assistant (JSA), Postal Assistant (PA), Sorting Assistant (SA). While in SSC CGL typing tests are held according to the marks obtained by the candidate. There are numerous posts in SSC CGL recruitment and not all of them require typing test. Those posts require the Typing test; they call the candidate according to their obtained marks in pre and mains of the SSC CGL exam. Posts like Assistant (CSS) and Tax Assistant for CBEC and CBDT require typing tests in the third phase of the examination. These are some of the prestigious posts offered by SSC in its CGL exam.

Those students who have cleared the first phase of the SSC CHSL exam or those who have been selected for typing test for various posts in the SSC CGL should start practicing from day one. Candidates can practice on their computers for typing tests. the only thing which will help the student to clear the typing test is practice. Students must learn the alphabet pattern of the keyboard. Learning alphabet patterns will help the student in typing fast. For better practice and Real-time typing test experience, candidates can easily download good typing software from the internet for convenience and better practice in typing. Typing software is available in both Hindi as well as the English language.

It’s a dream of every middle-class student to join government services so that he/she can give a better future to his/her parents as well as family. Nowadays, competition has increased multiple times and it is really hard for a student to compete in the current scenario. Strong willpower and exceptional skill are required to be in the race of joining government office. SSC is a ship that only sails with smart and exceptional candidates, those candidates who are willing to put their extra effort into the preparation. The way to get a government job is not easy but at the end of the road success is waiting with garland of flower in its hands.

Typing knowledge is the demand of the hour. Now in every field, there is a huge demand for a good typist. As technology is changing, the mode of entry of data is also changing. Now we have cloud servers and computers, big storage devices are in the … END_OF_DOCUMENT_TOKEN_TO_BE_REPLACED

There is a sense of dignity and pride in serving the nation. It is in the core of a human to work and stand for his nation at the need of the hour. A lot of youngsters of our country look forward to joining the defence to stand for their nation at … END_OF_DOCUMENT_TOKEN_TO_BE_REPLACED

Typing skill is required in every job. You must possess a good typing speed if you are looking for a good job. Both the public, as well as private firms, require typist. In the current time, typing proficiency is a must. It is the most vital and … END_OF_DOCUMENT_TOKEN_TO_BE_REPLACED

While reading through the news or articles that are being published online nowadays, many people tend to get confused between a few letters. Like 0 (Zero) & O (Capital o), I (capital i) & l (small L). To help you out we have prepared a little … END_OF_DOCUMENT_TOKEN_TO_BE_REPLACED